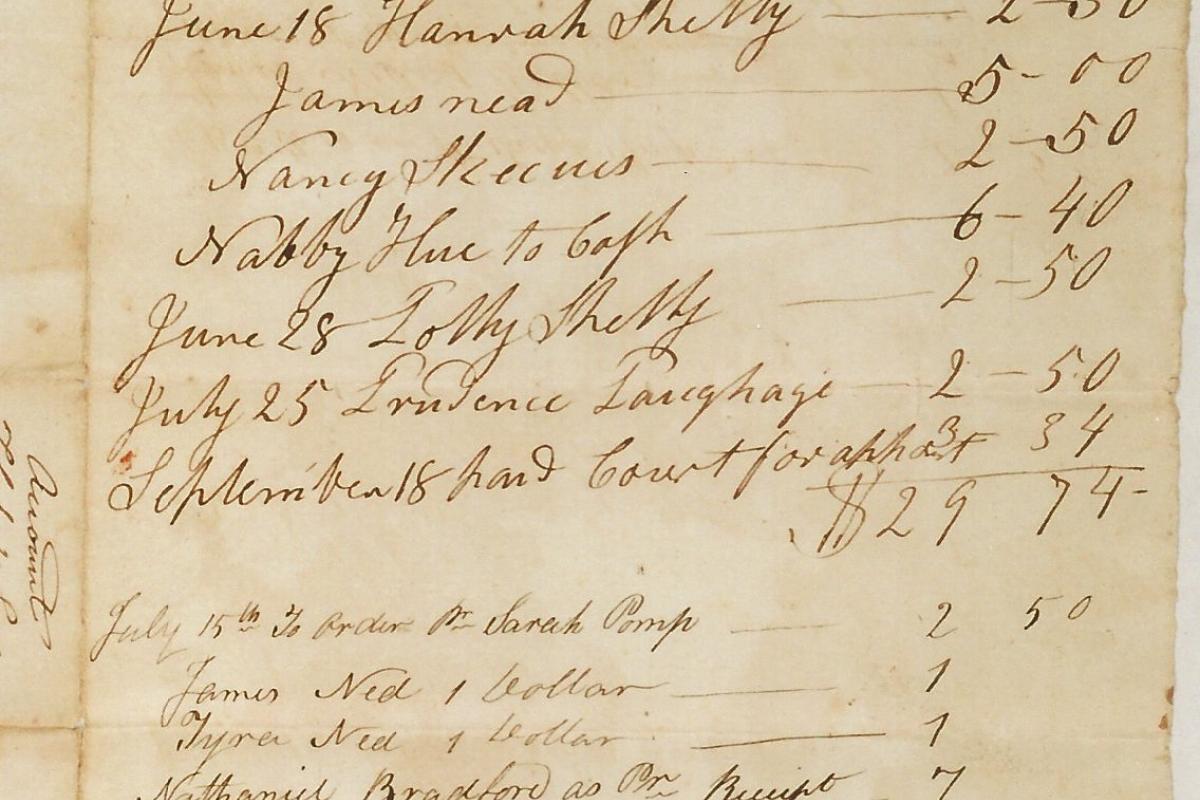 This collection of 41 digital heritage items includes manuscript ledgers/accounts, receipts, invoices, bonds, and petitions associated with five different overseers for the Eastern Pequot tribe during the 30-year period between 1820 to 1850.

41 items
In this collection

More than half of these digital heritage items are the annual reports to the New London County Court, tallying the expenses and income of the community as provided by the overseer.  In some cases, and depending on the individual agent, these ledgers or accounts can contain a surprising level of detail, especially in instances where they can be paired with corresponding invoices.  In general, the rental of reservation land to neighboring non-natives is the primary source of tribal income and is used to offset expenses such as food, supplies, and other necessaries billed to the tribe over the course of a given year.

These records span a time period in which there are several significant cultural and historical events relevant to Eastern Pequot history, some of which are reflected in the documents themselves.  Similar to those of the neighboring Mashantucket community, this collection contains evidence of the continued connection between Brothertown Indians of Eastern Pequot descent and the larger Eastern Pequot community that remained in Connecticut.  Not only is there the return of Brothertown Indians to the Eastern Pequot reservation to either visit or to collect funds that are due them, but documents show that in at least one instance, there is a very late stage (1850) emigration from Eastern Pequot to the Brothertown community, newly established in Wisconsin.  Of course, these overseer records were penned in the context of other more local religious and temperance movements that emerged from the Second Great Awakening of which the Eastern Pequot were also a part.

Perhaps most importantly, juxtaposed against these broader historical happenings, these records provide a glimpse into the day-to-day lives of members of the Eastern Pequot community in and around the reservation.  Highlighted in these materials are the economic realities associated with obtaining adequate food, housing, education, and healthcare on a much-diminished land base and in the face of a difficult to navigate State bureaucracy.

Equally significant, the overseer records, as well as the biographies of the people associated with them, show the increasing presence of African Americans and People of Color in a shared social space with both the Eastern and Mashantucket Pequot as neighbors, friends, members of the same church, or sometimes spouses or partners.

Transcriptions, annotations, biographies, cultural narratives, and scholarly commentaries, as components of each digital heritage item, serve to add context and perspective, and allow a researcher to see beyond the columns of credits and debits and into the lives of the ancestors of today’s Eastern Pequot Tribal Nation.

Below there are two entry points into the digital heritage items collection.  The first is an interactive timeline with contextual information including the appointment of overseers as well as a number of other important community events.  The second is a listing of the contents of the collection, linking directly to relevant Digital Heritage Items. 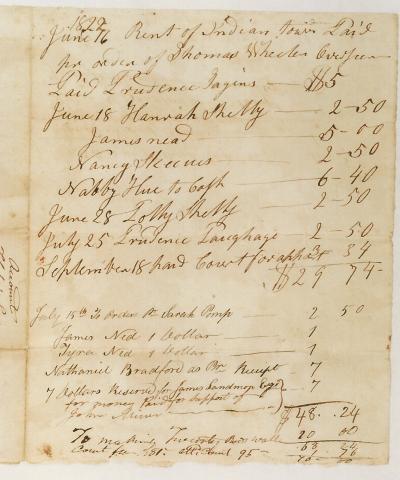 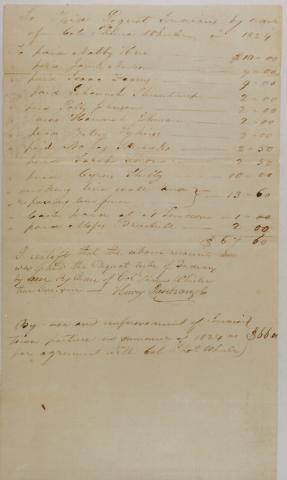 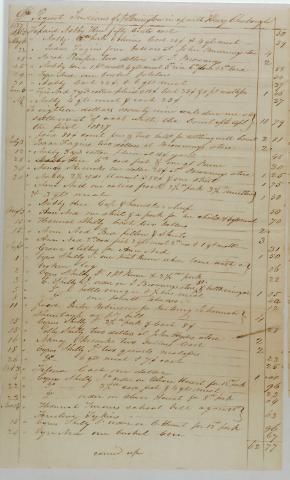 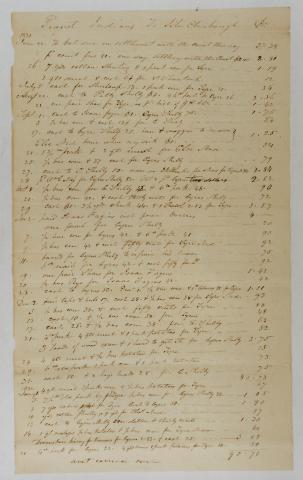 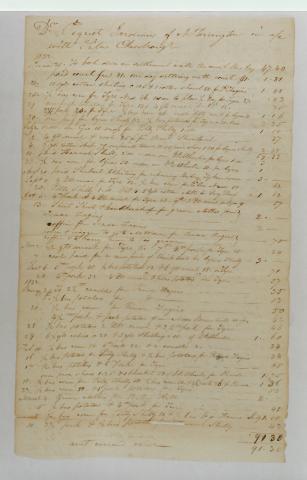 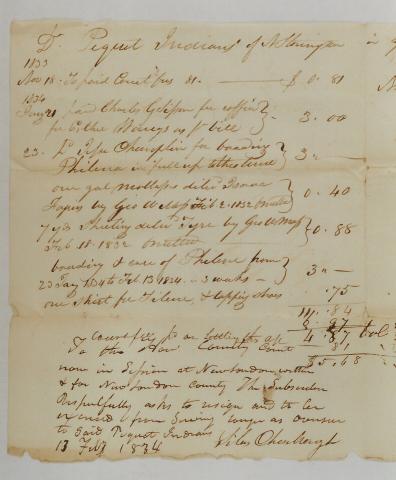 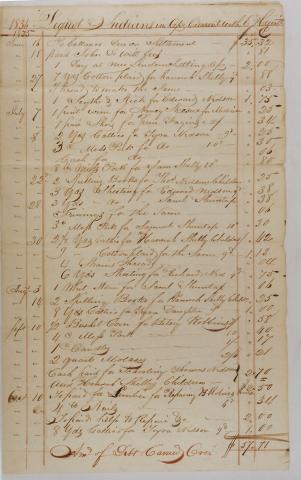 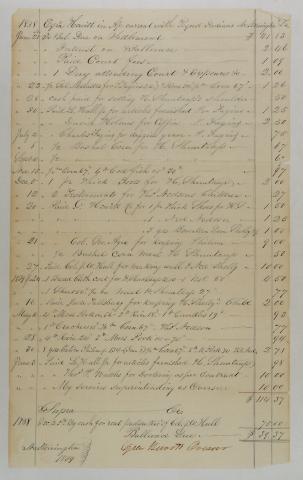 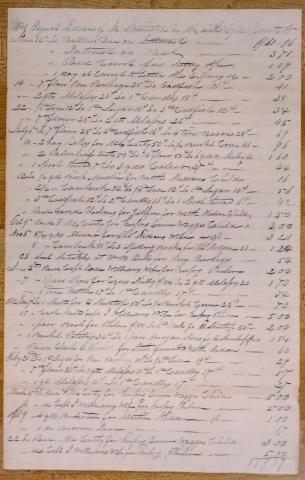 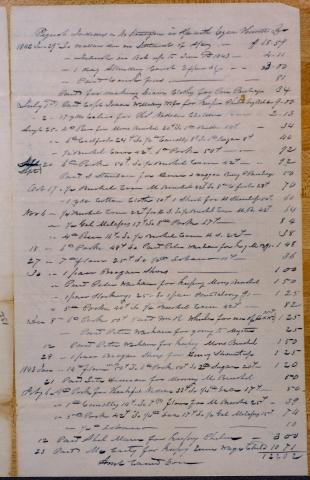 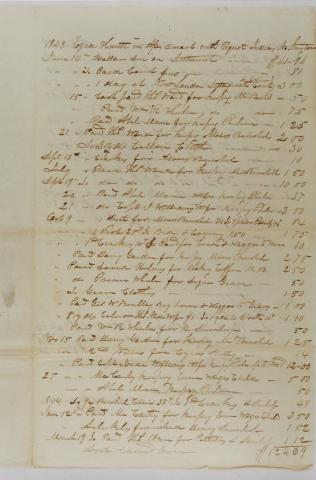 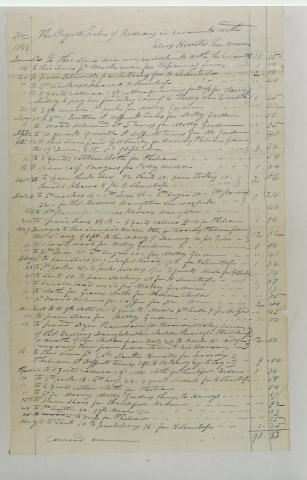 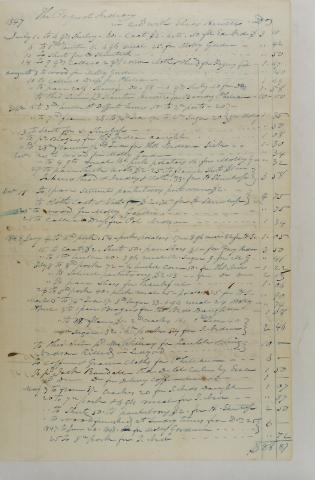 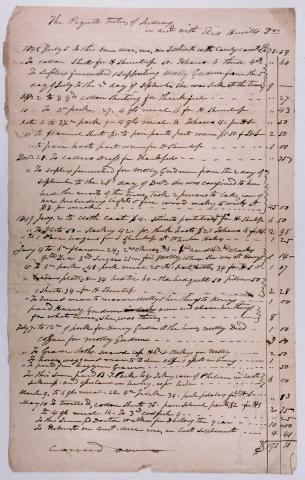 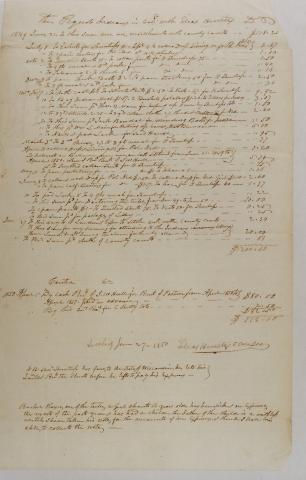 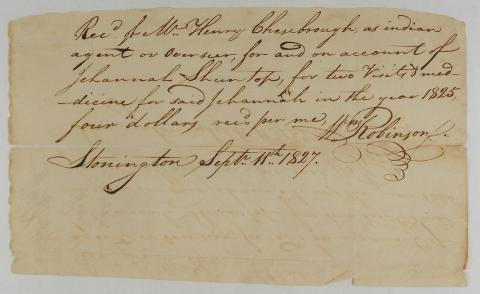 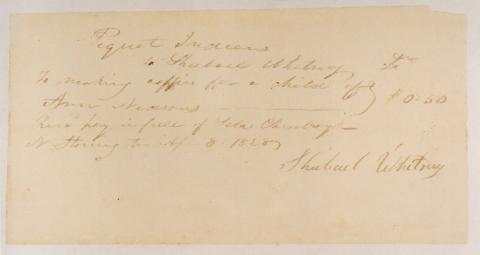 Bill from Shubael Whitney to Silas Chesebrough, Overseer of the Eastern Pequot Tribe for Goods Provided