The power to deal with and regulate the tribes is wholly federal; the states are excluded unless Congress delegates power to them. The federal government has the responsibility for the protection of the tribes and their properties, including protection from the encroachments by the states and their citizens. Indian title was held by the tribes before the first settlers arrived. Aboriginal title, also known as Indian title or Indian right of occupancy, broadly refers to ownership of lands inhabited by a tribe based on immemorial rights arising long before contact with Euro-Americans. Prior to colonization, tribal communities solely governed their own affairs and demonstrated true autonomy. Upon contact tribal nations were considered true sovereign entities, without pressure to alter or legitimize their social and political structures. Thus, England, France, and Spain, and later the United States, entered into numerous treaties with tribal governments to purchase land and to guarantee peace between the new settlers and Indians. This decision to deal with Indian tribes on a political government-to-government treaty basis has left American Indians today in the situation of being citizens of the United States, the states wherein they live, and also as citizens of their individual Nations. Consequently, Indian people and Indian tribes have a political status vis-a-vis the United States that other U.S. citizens do not.

In August 1636 Massachusetts Bay organized a force of ninety soldiers under the command of Colonel John Endicott where they were instructed to proceed to Pequot territory to “kill all the men and take away the women and children.” On May 1, 1637 the General Court at Hartford ordered an offensive war to be undertaken against the Pequots. The original battle plan was to “destroy them by the sword and save the plunder.” On September 21, 1638, the “Treaty of Hartford” put an official end to the Pequot War. The treaty stipulated, in part, that the surviving Pequot “shall no more be called Pequots…and shall not suffer them for to live in the country that was formally theirs.” Hundreds were sold into slavery or indentured servitude.  The goal of the “Treaty” was “to eliminate the Pequots as a viable social and political entity.” Thereafter, the Colony of Connecticut considered the aboriginal title of the Pequots to have been extinguished by conquest.

Even so, the Western band remained intact and returned to former Pequot villages at Nameag (New London) along the west bank of the Pequot (Thames) River. In the late 17th century, the land base of the Mashantucket Pequots surpassed 3,500 acres (Mashantucket – 2,500; Noank – 500 acres; Walnut Hill – 600 acres).

From 1785-1800, the tribe submitted a series of petitions to the CT General Assembly to settle boundary disputes, sell land to pay debts, and obtain permission to rent reservation lands. The English often ignored Pequot rights to land by destroying Pequot planting fields and apple orchards, fences, and timber. Overseers reported  in 1751 that the English fenced in the best Pequot lands, built several houses, and excluded the Pequots from their orchards, firewood and planting fields, and were able to plant only one acre on the west side of the reservation. In 1761, the English were granted the 800 acres located on the west side of the reservation because of the improvements they had made. As a result of colonial actions or practices to reduce or eliminate Pequot lands at Noank, Walnut Hill and Mashantucket, the MashantucketPequot’s land base was reduced by over 60%. These losses, combined with reduced or restricted access to interior hunting lands and coastal resources, greatly affected Pequot land use practices and subsistence patterns in the eighteenth century.

Then, in 1976, the tribe instituted a suit in Federal Court claiming that the land sales in the mid-1800s were in violation of federal law (Trade and Intercourse Act) and therefore were null and void. The suit stipulated a return of the Tribe’s land taken in the 1856 land sale. On June 9, 1982, the State passed the “Act to Implement the Settlement of the MashantucketPequot Indian Lands Claims.” On October 18, 1983 the U.S Congress signed into law companion federal legislation. This legislation provided for the settlement of stolen Pequot lands, discharged the State of Connecticut of responsibilities, and extended federal recognition to the tribe 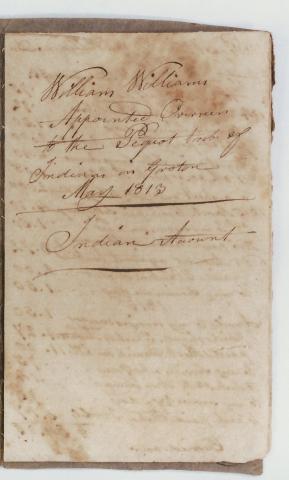 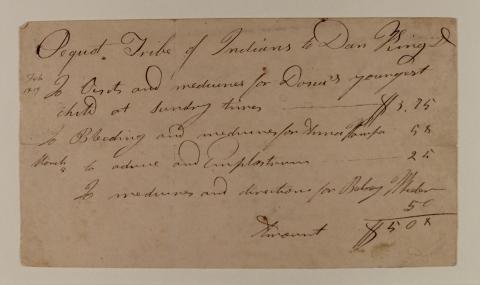 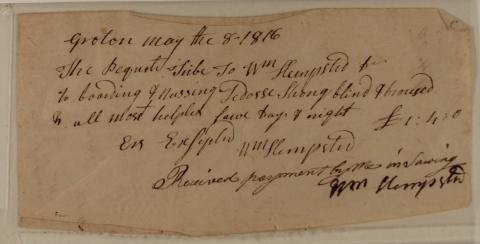 Receipt of William Hempsted for Services Provided the Pequot Tribe 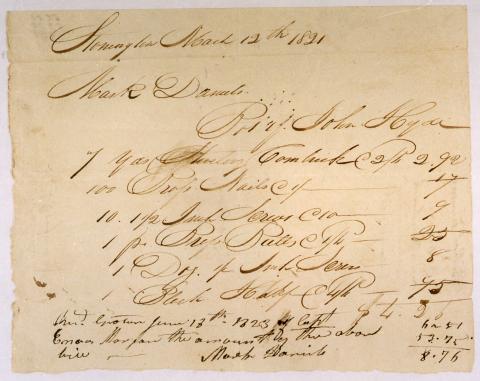 Bill from Mark Daniels to Eneas Morgan, Overseer to the Western Pequot Indians