Lydia Squinn was the daughter of Benjamin Tuspaquin and Mercy Felix of the Wampanoag Indian community at Betty's Neck in Middleborough, Massachusetts.  After her parents' deaths, she was raised by her grandfather, Benjamin Tuspaquin.  At an early age, Lydia resided with Joanna Hunt in Petersham, Massachusetts, where she attended local schools and became a good scholar.  She married an Indian man named Wamsley and had five children: Zerviah, Paul, Phebe, Jane, and Benjamin.  Lydia petitioned the Massachusetts General Court in 1772, requesting permission to see land in Middleborough to settle some of her debts.  Both the guardians of the Middleborough Indians and the legislature approved.  In later life, Lydia used her literacy by assisting others at Betty's Neck.  She also was a gifted herbalist and healer.  In the summer of 1812, while gathering herbs, Lydia died by falling from a high bank and drowning in the Assawompsett Pond.  Pierce, Indian History, Biography, and Genealogy, 215-216.  Massachusetts Archives 33: 541-542. 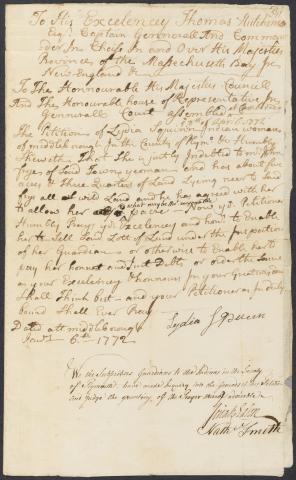 Petition of Lydia Squinn to the Massachusetts General Court