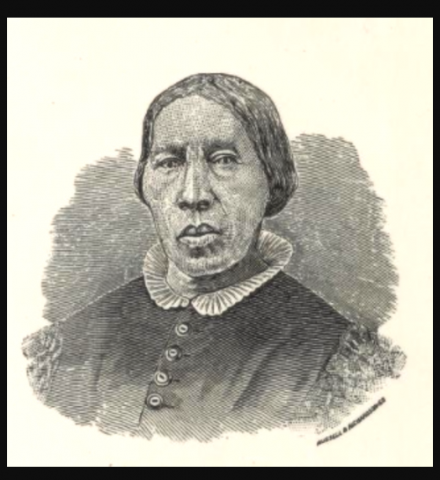 Descended from Indian leaders Ousameequan/Yellow Feather, Sassacus, and Tuspaquin (the Black Sachem), Zerviah Gould was the daughter of Brister Gould and Phebe Squinn of North Abington, Massachusetts.  On October 17, 1824, she married Thomas Mitchell in Fall River, Massachusetts.  The couple went on to have eleven children:  Melinda, Jane, Zerviah, Levinia, Delores, Thomas, John, Lydia, Emma, Charlotte, and Alonzo.  Educated in the public schools of Abington, Zerviah became the first woman of color to apply to Wheaton College.  Although she was turned down, it seemed that it was a decision she actually requested.  She later taught at a private school in Boston.  In 1856, she began an ultimately successful multi-year campaign to assert her ancestral rights into four lots of land on the Fall River's Indian reservation.  Two years later, she had land there surveyed and moved a house from another district in that city.  However disgruntled reservation residents vehemently opposed to her presence broke windows and made her so unwelcome that she abandoned her residency there.  After the death of her husband Thomas in 1859, Zerviah removed to Assawampsett or Betty's Neck in North Abington with her daughters Melinda and Charlotte.  In 1878, with Ebenezer W. Pierce she published Indian History, Biography, and Genealogy, a monograph containing a narration of the life of Massasoit, of King Philip's War, and a genealogy of Massasoit's descendants, including her own family.  Living at Assawampsett until her death, Zerviah often received visits from scholars, news reporters, and several authors like Henry Wadsworth Longfellow.  For more information and photographs, see "Teweelema, Betty's Neck and Wampanoag Rye-straw Basketry," Historic Iroquois and Wabanaki Beadwork.  "Indian Princess Dead," Boston Morning Journal, March 8, 1898, 4.  "Zerviah Mitchell becomes the first African-American to apply to Wheaton," College History. Dubuque, The Fall River Reservation, 84-85.  "American Princess. Daughter of a Long Line of Kings Now Living at Betty's Neck, Mass,"  The New York Herald, October 20, 1895, 1.  Image from Pierce, Indian History, Biography, and Genealogy. 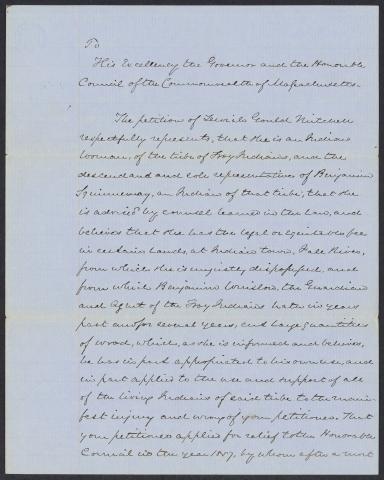 A complaint by Zerviah Gould Mitchell regarding the illegal cutting and sale of wood from her land and a request for a legislative inquiry and redress
Community:
Fall River/Troy
Category:
Geography, Land, & the Environment, Culture & Society, Politics, Power, & Sovereignty